Unless otherwise noted, all Web addresses mentioned were functional as of 7-5-19.

From the Cumberland Gap to the Atlantic Ocean, this is Virginia Water Radio for the week of July 8, 2019.

This week, that excerpt of “Rain Refrain,” by Torrin Hallett, opens an episode on a recently published scientific paper challenging the typical depiction of a vital, worldwide cycle.  Have a listen for about 30 seconds to some mystery sounds related to this cycle, see if you know any of three names for the cycle.

If you guessed the water cycle, the hydrologic cycle, or the hydrological cycle, you’re right!  You heard sounds of some of the components typically included in descriptions or diagrams of the water cycle: rainfall, representing precipitation; a river, representing surface water and flow; coastal waves, representing the ocean; and water flowing from a spring, representing groundwater storage and movement.  The final sound you heard—a household faucet—represents the role of humans in the water cycle, an aspect not as often included in water cycle diagrams.  The exclusion of a human component from water cycle diagrams is one of the main issues raised in a July 2019 scientific article entitled, “Human domination of the global water cycle absent from depictions and perceptions.”  Published in the journal Nature Geoscience, the paper was authored by 23 scientists from seven U.S. research institutions, including Virginia Tech, and from six other countries.

The researchers examined several dozen recent studies of the global water cycle to identify and quantify 16 sources of water, called “pools,” and 16 water-movement processes, called “fluxes.”  They then compared those findings to over 400 water cycle diagrams from several countries, including the United States.  The researchers found that the majority of water cycle diagrams didn’t include, or inaccurately represented, several components or principles identified in the scientific studies.  As already noted, one main finding was the widespread exclusion of human interactions with water.  Other components that the researchers assert were underrepresented include precipitation over the ocean [p. 535 of the research paper]; the amount of fresh water that is actually available for human use [p. 535]; large water bodies with no surface outlet, such as the Caspian Sea in western Asia [p. 539]; and uncertainty and variation over time in estimates of water cycle components [p. 535].

The researchers suggest that inaccuracies in water cycle depictions can, quote, “reflect and reinforce the misunderstanding of global hydrology by policymakers, researchers, and the public.”  Conversely, they assert that improving the accuracy of widely used water cycle diagrams would be, in the researchers’ words, “an important step towards equitable water governance, sustainable development, and planetary thinking.”

Thanks to the U.S. Fish and Wildlife Service for the ocean sounds, and to Torrin Hallett for this week’s music. We close by letting part of the water cycle have the last sound.

The coastal waves sounds recording was accessed at the U.S. Fish and Wildlife Service’s National Digital Library/Audio Collection, online at https://digitalmedia.fws.gov/digital/collection/audio/search/searchterm/audio%20clip/field/subjec/mode/exact/conn/and/order/dmcreated/ad/desc, as of 7/8/19.

“Rain Refrain” is copyright 2016 by Torrin Hallett, used with permission.  Torrin is a 2018 graduate of Oberlin College and Conservatory in Oberlin, Ohio; as of 2019, he is a graduate student in Horn Performance at Manhattan School of Music in New York.  More information about Torrin is available online at https://www.facebook.com/torrin.hallett.  This music was also featured in Episode 338, 10-17-16, on rainfall measurements; and Episode 455, 1-14-19, on record Virginia precipitation in 2018.  Thanks very much to Torrin for composing the piece for Virginia Water Radio.

Following are links to other episodes featuring music composed by Torrin Hallett.

A Sample of Water Cycle Diagrams 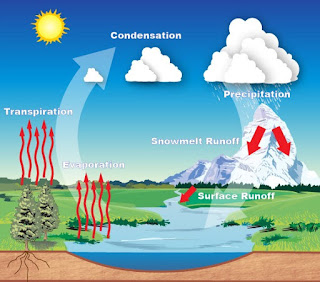 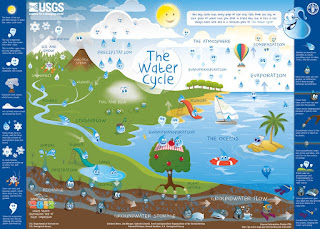 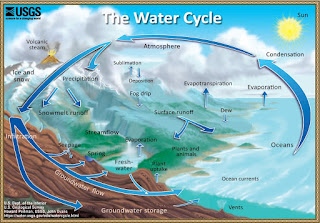 EXTRA INFORMATION ABOUT THE WATER CYCLE

A (Very) Quick Summary of the Water Cycle
“Where does all the Earth's water come from? Primordial Earth was an incandescent globe made of magma, but all magmas contain water.  Water set free by magma began to cool down the Earth's atmosphere, until it could stay on the surface as a liquid.  Volcanic activity kept and still keeps introducing water in the atmosphere, thus increasing the surface- and groundwater volume of the Earth.

“The water cycle has no starting point.  But, we'll begin in the oceans, since that is where most of Earth's water exists.  The sun, which drives the water cycle, heats water in the oceans.  Some of it evaporates as vapor into the air. Ice and snow can sublimate directly into water vapor.  Rising air currents take the vapor up into the atmosphere, along with water from evapotranspiration, which is water transpired from plants and evaporated from the soil.  The vapor rises into the air where cooler temperatures cause it to condense into clouds.

“Air currents move clouds around the globe, cloud particles collide, grow, and fall out of the sky as precipitation.   Some precipitation falls as snow and can accumulate as ice caps and glaciers, which can store frozen water for thousands of years.  Snowpacks in warmer climates often thaw and melt when spring arrives, and the melted water flows overland as snowmelt.

“Most precipitation falls back into the oceans or onto land, where, due to gravity, the precipitation flows over the ground as surface runoff.  A portion of runoff enters rivers in valleys in the landscape, with streamflow moving water towards the oceans.  Runoff, and groundwater seepage, accumulate and are stored as freshwater in lakes.  Not all runoff flows into rivers, though.  Much of it soaks into the ground as infiltration.  Some water infiltrates deep into the ground and replenishes aquifers (saturated subsurface rock), which store huge amounts of freshwater for long periods of time.

Encyclopedia Britannica, “Caspian Sea,” online at https://www.britannica.com/place/Caspian-Sea; and “Great Salt Lake,” online at https://www.britannica.com/place/Great-Salt-Lake.  The Caspian Sea and the Great Salt Lake are examples of inland water bodies that do not drain eventually to the ocean; such water bodies are referred to as “endorheic basins or endorheic lakes.”  See also the United Nations Environment Programme reference below.

Following are links to some other episodes on the water cycle.

Grades K-6 Matter Theme
6.5 – properties and characteristics of water and its roles in the natural and human environment.

Earth Science Course
ES.1 – current applications to reinforce science concepts.
ES.8 – influences by geologic processes and the activities of humans on freshwater resources, including identification of groundwater and major watershed systems in Virginia, with reference to the hydrologic cycle.