Unless otherwise noted, all Web addresses mentioned were functional as of 7-12-19.

From the Cumberland Gap to the Atlantic Ocean, this is Virginia Water Radio for the week of July 15, 2019.  This is a revised repeat of an episode from July 2015.

This week, that excerpt of “Gravity,” by Bob Gramann of Fredericksburg, Va., sets the stage to remember an historic overcoming of gravity and many other challenges that took place fifty years ago this July 20th.  Even if that date is your birthday, you’ll probably agree that the date’s most historic event happened in 1969, on a desolate, far-away place strongly connected to water on earth.  Let’s listen back for about 35 seconds to parts of that history.

Those were NASA recordings of Apollo 11’s lift-off on July 16, 1969; the July 20th lunar-module landing on the moon; and astronaut Neil Armstrong’s famous words just before setting foot on the moon.   Watched live on television by an estimated 650 million people, Apollo 11’s moon landing was a milestone in space exploration, which in the 50 years since has achieved spacecraft landings on Mars and Venus, fly-bys as far away as Pluto, and missions beyond our solar system.  One of the main objectives of exploring the moon and beyond has been the search for evidence of water, including whether liquid water may have occurred on Mars, other planets, or planetary satellites, all places where water ice has been found.

But every day we see the evidence of the moon’s effect on Earth’s water.   In 1687, Isaac Newton explained scientifically how daily ocean tides result largely from the gravitational pull of the moon and sun, with the moon exerting the strongest influence.  The moon’s pull also helps stabilize the orientation of the earth’s axis, a major factor in determining climate and seasons.  The moon’s gravitational effects play a role in two of the 21st Century’s big challenges—sustainable energy, and the impacts of a changing climate.  In some places, the range and speed of daily tides provide enough renewable energy that commercial-scale electricity generation can be feasible.  Meanwhile, higher tides and tidal flooding resulting from climate-related sea-level rises present a technological and political challenge to many coastal communities, not least in Virginia’s Tidewater and Eastern Shore areas.

Just like reaching the moon, those and other current challenges tax our will, wallets, and imagination.  So let’s go out with words President John F. Kennedy used in 1961 to capture the United States’ imagination for reaching a goal about 240,000 miles away.

VOICE – ~25 sec
Excerpt of NASA audio of President John F. Kennedy, May 25, 1961, speech to Congress:
“We choose to go to the moon in this decade and do the other things, not because they are easy, but because they are hard.   Because that goal will serve to organize and measure the best of our energies and skills.  Because that challenge is one that we’re willing to accept, one that we are unwilling to postpone, and one we intend to win.”

“Gravity,” from the 1995 album “Mostly True Songs,” is copyright by Bob Gramann, used with permission.  More information about Bob Gramann is available online at https://www.bobgramann.com/folksinger.html.  Virginia Water Radio thanks Mr. Gramann for permission to use this music.

The Apollo 11 sounds and the May 25, 1961, recording of President John Kennedy’s speech to Congress were taken from the National Aeronautic and Space Agency (NASA), online at http://www.nasa.gov/connect/sounds/index.html. 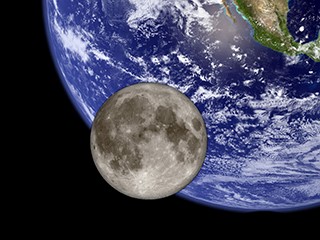 Earth’s moon compared to the Earth. Image from NASA, accessed online at https://moon.nasa.gov/about/in-depth/. 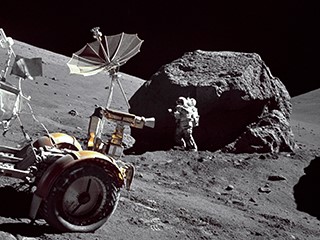 Geologist-Astronaut Harrison Schmitt working next to a boulder during Apollo 17 extravehicular activity in 1972.  Image from NASA, accessed online at https://moon.nasa.gov/about/in-depth/. 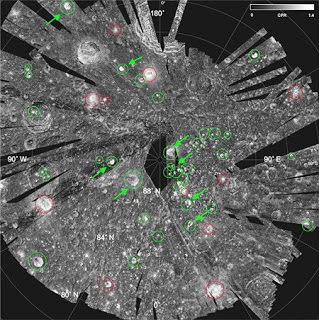 NASA radar image of the north pole of the Moon, part of a March 2, 2010, NASA announcement of finding more than 40 craters in the area (green circles) that contain water ice, according to the characteristics of the radar images. Available accessed online at http://www.nasa.gov/mission_pages/Mini-RF/multimedia/feature_ice_like_deposits.html. 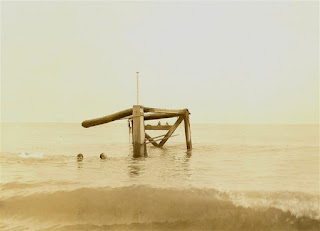 Workers repairing a tidal gauge (or gage) in Lynnhaven Bay in Virginia, circa 1933.  Image from the NOAA Photo Library (National Oceanic and Atmospheric Administration/U.S. Department of Commerce), accessed online at https://photolib.noaa.gov/, accessed 7/15/19; specific URL for the photo is https://photolib.noaa.gov/Collections/Coast-Geodetic-Survey/Other/emodule/1181/eitem/75119.

EXTRA INFORMATION ABOUT THE EARTH'S MOON

The following is quoted from NASA, “Earth’s Moon/About the Moon—In depth,” online at https://moon.nasa.gov/about/in-depth/, as of 7/11/19.

“The regular daily and monthly rhythms of Earth’s only natural satellite, the Moon, have guided timekeepers for thousands of years. Its influence on Earth’s cycles, notably tides, has been charted by many cultures in many ages.

“The Moon moderates Earth’s wobble on its axis, leading to a relatively stable climate over billions of years. From Earth, we always see the same face of the Moon because the Moon is spinning on its axis at the same speed that it is going around Earth (that is, it is in synchronous rotation with Earth).”

“The light areas of the Moon are known as the highlands.  The dark features, called maria (Latin for seas), are impact basins that were filled with lava between 4.2 and 1.2 billion years ago.  These light and dark areas represent rocks of different composition and ages, which provide evidence for how the early crust may have crystallized from a lunar magma ocean.  The craters themselves, which have been preserved for billions of years, provide an impact history for the Moon and other bodies in the inner solar system.”

“The leading theory of the Moon’s origin is that a Mars-sized body collided with Earth approximately 4.5 billion years ago, and the resulting debris from both Earth and the impactor accumulated to form our natural satellite.  The newly formed Moon was in a molten state.  Within about 100 million years, most of the global “magma ocean” had crystallized, with less-dense rocks floating upward and eventually forming the lunar crust.

“The early Moon may have developed an internal dynamo, the mechanism for global magnetic fields for terrestrial planets.  Since the ancient time of volcanism, the arid, lifeless Moon has remained nearly unchanged. With too sparse an atmosphere to impede impacts, a steady rain of asteroids, meteoroids, and comets strikes the surface.  Over billions of years, the surface has been ground up into fragments ranging from huge boulders to powder.

“Nearly the entire Moon is covered by a rubble pile of charcoal-gray, powdery dust and rocky debris called the lunar regolith.  Beneath is a region of fractured bedrock referred to as the megaregolith.”

“The first human landing on the Moon was on July 20, 1969.  During the Apollo missions of 1969–1972, 12 American astronauts walked on the Moon and used a Lunar Roving Vehicle to travel on the surface and extend their studies of soil mechanics, meteoroids, lunar ranging, magnetic fields, and solar wind.  The Apollo astronauts brought back 382 kilograms (842 pounds) of rock and soil to Earth for study.

“After a long hiatus, lunar exploration resumed in the 1990s with the U.S. robotic missions Clementine and Lunar Prospector.  Results from both missions suggested that water ice might be present at the lunar poles, but a controlled impact of the Prospector spacecraft produced no observable water.  The U.S. began a new series of robotic lunar missions with the joint launch of the Lunar Reconnaissance Orbiter (LRO) and Lunar Crater Observation and Sensing Satellite (LCROSS) in 2009.  In 2011, a pair of repurposed spacecraft began the ARTEMIS (Acceleration, Reconnection, Turbulence, and Electrodynamics of the Moon’s Interaction with the Sun) mission.  In 2012, the Gravity Recovery and Interior Laboratory (GRAIL) twin spacecraft studied the Moon’s gravity field and produced the highest-resolution gravity field map of any celestial body.

“In March 2019, NASA Administrator JIm Bridenstine announced plans to send U.S. astronauts back to the surface of the Moon by 2024.

“The European Space Agency, Japan, China and India all have sent missions to explore the Moon.  China has landed two rovers on the surface, including the first-ever landing on Moon's far side in 2019.  In another first, a private company from Israel sent a spacecraft to land on the Moon in April 2109.  Israel's Beresheet successfully orbited the Moon, but was lost during a landing attempt.”

Deborah Byrd, “Tides, and the pull of the moon and sun,” 2/19/19, online at http://earthsky.org/earth/tides-and-the-pull-of-the-moon-and-sun.

NOAA/National Ocean Service, “What is a tide gauge?” online at https://oceanservice.noaa.gov/facts/tide-gauge.html.

PBS NewsHour, “Pluto, Underdog of the Solar System, Finally Gets Its Day,” July 15, 2015 (8 min./51 sec. video), online at http://www.pbs.org/newshour/bb/pluto-underdog-solar-system-finally-gets-day/.  This is a report on NASA’s New Horizons spacecraft’s fly-by of Pluto; the report includes a brief history of the discovery and previous investigations of Pluto.

U.S. Department of Energy (DOE)/Office of Energy Efficiency and Renewable Energy, “Marine and Hydrokinetic Resource Characterization and Assessment,” online at http://energy.gov/eere/water/marine-and-hydrokinetic-resource-assessment-and-characterization.  This site, part of DOE’s Water Power Program, covers energy potential and use from tides, ocean and river currents, waves, and thermal gradients in the ocean.

All Water Radio episodes are listed by category at the Index link above (http://www.virginiawaterradio.org/p/index.html).  See particularly the “Science” subject category.

Following are links to some other episodes on topics mentioned in this episode.

Grades K-6 Earth Patterns, Cycles, and Change Theme
3.8 – patterns and cycles in nature (including phases of the moon and tides).
4.7 – organization of the solar system.
4.8 – relationships among Earth, the moon, and the sun.

Grades K-6 Interrelationships in Earth/Space Systems Theme
5.6 – characteristics of the ocean environment.
5.7 – constant change of Earth’s surface (including weathering and erosion, and plate tectonics).
6.6 – organization and interactions of the solar system (including gravity, moon phases, earth tilt, tides, and history of space exploration).

United States History: 1865-to-Present Course
USII.8 – economic, social, and political transformation of the United States and the world after World War II.
USII.9 – domestic and international issues during the second half of the 20th Century and the early 21st Century.