Unless otherwise noted, all Web addresses mentioned were functional as of 8-23-21.

From the Cumberland Gap to the Atlantic Ocean, this is Virginia Water Radio for the week of August 23, 2021.  This episode, the second in a series of episodes on water in U.S. civil rights history, explores water as symbolism in African American civil rights history.  [The first episode in the series--the series overview--is Episode 566, 3-1-21.]  We start with about 50 seconds of music.

You’ve been listening to part of “Follow the Drinking Gourd,” recorded by Eric Bibb in 2013.  The song is believed to have been used prior to the Civil War as a code to help enslaved people escape on the Underground Railroad.  In that interpretation, the verses gave information about the route, and the drinking gourd referred to the Big Dipper, setting the direction to go by pointing towards the North Star.  Another water-related spiritual song, “Wade in the Water,” is also believed to have been used as Underground Railroad code.  Both songs became popular hymns within African American churches and, by the mid-1900s, were closely associated with the modern Civil Rights Movement.

In a 2018 post entitled “The Role of Water in African American History,” Tyler Parry stated that, “water’s culturally symbolic importance resonated across generations….”

Following are four other examples of water symbolism connected to the African American movement for civil rights.

Number 1: “Parting the waters.”  This phrase refers to the account in the Bible Book of Exodus, in which God parted the waters of the Red Sea so that the Israelites could escape from Egyptian slavery.  It’s been used as a metaphor for the enormous challenges that African Americans have faced in acquiring and asserting their civil rights.  For instance, it’s the title of the first volume in Taylor Branch’s trilogy on the modern civil rights era, America in the King Years.  That trilogy is the source for the next two examples.

Number 2. “Until justice rolls down like waters, and righteousness like a mighty stream.”  Martin Luther King, Jr., frequently used this phrase, taken from the Bible Book of Amos, to describe how long the U.S. civil rights movement would need to continue.

And number 4. “A fire no water could put out.”  Dr. King used this phrase in his final public sermon in Memphis.  Recalling demonstrations in Birmingham, Alabama, when Birmingham Commissioner of Public Safety “Bull” Connor ordered fire hoses turned on demonstrators, Dr. King said that Connor didn’t realize “that there was a certain kind of fire that no water could put out.”

These examples are only a small piece of a much larger story.  I invite listeners to offer Virginia Water Radio other examples of water metaphors and symbolism in U.S. civil rights history.

Thanks to Eric Bibb, his manager Heather Taylor, and Riddle Films for permission to use this week’s music, and we close with about 25 more seconds of Mr. Bibb performing “Follow the Drinking Gourd.”

An excellent version of “Wade in the Water” (the other song mentioned in this week’s audio), performed by Deeper Dimension, is available online at https://www.youtube.com/watch?v=9NQvOFTioJg. 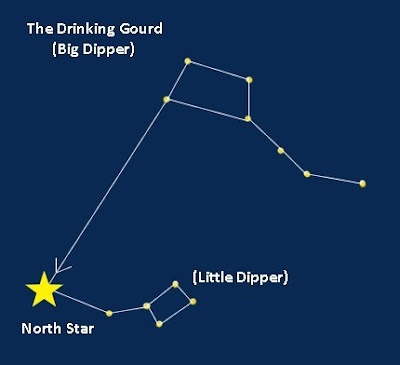 Image of the relation of the constellation known as the Big Dipper and as the Drinking Gourd to the North Star.  Image from the National Park Service, “North Star to Freedom,” accessed online at https://www.nps.gov/articles/drinkinggourd.htm, 8/23/21. 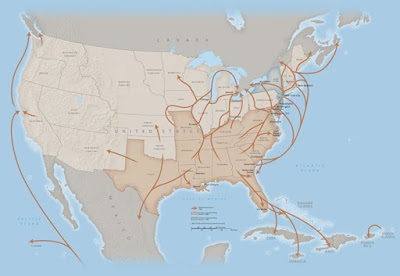 Map of escape routes for enslaved people prior to the U.S. Civil War.  Map by National Park Service, “What is the Underground Railroad?”  Image accessed online at https://www.nps.gov/subjects/undergroundrailroad/what-is-the-underground-railroad.htm, 8/23/21. 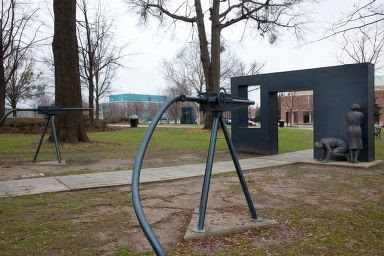 C. Michael Hawn, “History of Hymns: ‘Wade in the Water,’” 2/1/16, Mississippi Conference of the United Methodist Church, online at https://www.mississippi-umc.org/newsdetail/2576866.

High Museum of Art (Atlanta, Ga.), “’A Fire That No Water Could Put Out’: Civil Rights Photography” (exhibit November 4, 2017—April 29, 2018), online at https://high.org/exhibition/a-fire-that-no-water-could-put-out-civil-rights-photography/.

NPR (National Public Radio) and Smithsonian Institution, “Wade in the Water” (26-part series produced in 1994 on the history of American gospel music), online at https://www.npr.org/series/726103231/wade-in-the-water.

Following are links to some previous episodes on the history of African Americans in Virginia.

Virginia Studies Course
VS.7 – Civil War issues and events, including the role of Virginia and the role of various ethnic groups.
VS.8 – Reconstruction era in Virginia, including “Jim Crow” issues and industrialization.

United States History: 1865-to-Present Course
USII.4 – Developments and changes in the period 1877 to early 1900s.
USII.6 – Social, economic, and technological changes from the 1890s to 1945.
USII.8 – Economic, social, and political transformation of the United States and the world after World War II.
USII.9 – Domestic and international issues during the second half of the 20th Century and the early 21st Century.