Unless otherwise noted, all Web addresses mentioned were functional as of 2-15-19.

From the Cumberland Gap to the Atlantic Ocean, this is Virginia Water Radio for the week of February 18, 2019.

That’s an excerpt of “The Race,” by the Harrisonburg, Va.-based group, The Steel Wheels.  During the third week of February 2019, the Virginia General Assembly was racing to finish work on the Commonwealth’s budget and on over 2700 other bills and resolutions—doing work that, to paraphrase The Steel Wheels’ lyrics, may make many “ripples” in the Commonwealth’s “sea of time.”  About 130 of this year’s measures concern water resources, either directly or indirectly through impacts on water from energy production, transportation, or other land uses.

This week is Virginia Water Radio’s annual episode giving you a chance to imagine being an Assembly member, and to consider how you’d vote on five of those water-related bills.  I’ll give you brief descriptions of the bills, followed by a couple of seconds to decide if you would vote for or against the idea.  Then I’ll use these two sounds [SOUNDS – ~3 sec – bell and buzzer] to indicate the bills’ status as of February 15; the bell means the bill passed or was still alive, and the buzzer means it had failed.  Ready?

No. 1: Senate Bill 1355 would require the closure of ponds storing coal combustion residuals, or coal ash, at four power stations in the Chesapeake Bay watershed, with the ash either recycled or deposited in permitted and lined landfills.  [SOUND – ~4 sec - bell]  The bill had passed the Senate and the House.

No. 2: Senate Bill 1573 would prohibit state leases or permits for oil or gas exploration or drilling in the beds of any Virginia waters in the Atlantic Ocean, and repeal the Commonwealth’s support for federal exploration or permitting efforts more than 50 miles offshore.  [SOUND – ~4 sec - buzzer]  The bill failed in a Senate committee.

No. 3: House Bill 2358 would create an advisory board and a laboratory to monitor the effects of the Sustainable Water Infrastructure for Tomorrow, or SWIFT, Project being undertaken by the Hampton Roads Sanitation District, in which the district is studying using treated wastewater to recharge of the Potomac Groundwater Aquifer.  [SOUND – ~4 sec - bell]  The bill had passed the House and Senate.

No. 4: House Bill 2761 would change the existing Cave Protection Act to the Karst Protection Act, adding sinking streams and other features to caves and sinkholes as the karst resources subject to state anti-pollution law and Department of Conservation and Recreation efforts in education, data-collection, and protection.  [SOUND – ~4 sec - buzzer]  The bill failed in a House committee.

And No. 5: House Bill 2008 would require the Department of Education, in consultation with representatives from renewable and conventional energy industries, to establish an energy career cluster as its 17th approved career cluster for technical education.  [SOUND – ~4 sec - bell]  The bill had passed the House.

This short game obviously can’t capture the scope of the General Assembly’s potential impacts on a subject as complicated and important as water.  Any bill involves more information and details than you heard here.  The General Assembly’s Web site, virginiageneralassembly.gov, has tools to help you get the details and to express opinions to Assembly members.

Thanks to Soundbible.com for making the ticking clock sound available for public use.  Thanks also to The Steel Wheels for permission to use this week’s music, and we close with a few more seconds of “The Race.”

“The Race,” by The Steel Wheels, is from the 2013 album “No More Rain,” used with permission.  More information about The Steel Wheels is available online at http://www.thesteelwheels.com/.

The ticking clock sound was recorded by Kevan GC and made available (10/25/10 upload) online at the Soundbible.com Web site, http://soundbible.com/1580-Ticking-Clock.html, for public use under the Creative Commons “Public Domain” dedication. 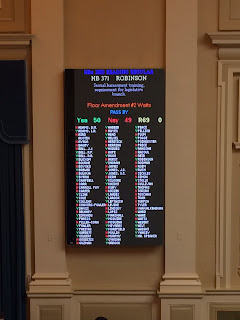 Voting board during the floor session of the Virginia House of Delegates on January 31, 2018. 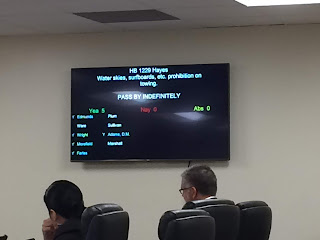 Voting board during a meeting of a subcommittee of the Virginia House of Delegates’ Committee on Agriculture, Chesapeake and Natural Resources, January 31, 2018. 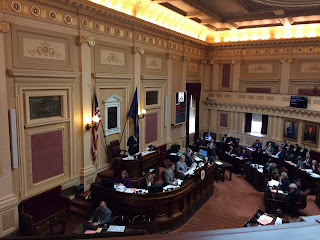 EXTRA INFORMATION ABOUT LEGISLATION MENTIONED IN THIS EPISODE

Following are Virginia Legislative Information System (LIS) summaries of the bills mentioned in this episode, as of 2/15/19, accessed at http://lis.virginia.gov/ (edited in some cases for space or clarity).  The bill numbers are hyperlinked to the respective LIS pages for each bill.

SB 1355 – Coal combustion residuals impoundment; closure.
“Requires the owner or operator of any coal combustion residuals (CCR) unit, defined in the bill to include a coal ash pond or landfill, within the Chesapeake Bay watershed at Bremo Power Station, Chesapeake Energy Center, Chesterfield Power Station, and Possum Point Power Station to close such CCR unit by removing all of the CCR for (i) recycling, known as encapsulated beneficial use, or (ii) deposition in a permitted and lined landfill that meets certain federal standards. The measure requires that any owner or operator beneficially reuse no less than 6.8 million cubic yards in aggregate of such removed CCR from no fewer than two of the sites. Such a closure project shall be completed within 15 years of its initiation and shall be accompanied by an offer by the owner or operator to provide connection to a municipal water supply for every residence within one-half mile, or if such connection is not feasible, the owner or operator shall offer to provide water testing for any such residence. …

“The measure provides that all costs associated with closure of a CCR unit shall be recoverable through a rate adjustment clause authorized by the State Corporation Commission (the Commission) provided that (i) when determining the reasonableness of such costs the Commission shall not consider closure in place of the CCR unit as an option; (ii) the annual revenue requirement recoverable through a rate adjustment clause shall not exceed $225 million on a Virginia jurisdictional basis for the Commonwealth in any 12-month period, provided that any under-recovery amount of revenue requirements incurred in excess of $225 million in a given 12-month period shall be deferred and recovered through the rate adjustment clause over up to three succeeding 12-month periods. The bill provides that costs may begin accruing on July 1, 2019, but no approved rate adjustment clause charges shall be included in customer bills until July 1, 2021; any such costs shall be allocated to all customers of the utility in the Commonwealth as a non-bypassable charge, irrespective of the generation supplier of any such customer; and any such costs that are allocated to the utility's system customers outside of the Commonwealth that are not actually recovered from such customers shall be included for cost recovery from jurisdictional customers in the Commonwealth through the rate adjustment clause. The measure prohibits cost recovery for any fines or civil penalties resulting from violations of federal or state law.”

SB 1573 – Offshore oil and gas drilling; prohibition.
“Prohibits the Marine Resources Commission or the Department of Mines, Minerals and Energy from granting any lease or permit for oil or gas exploration or drilling, or the construction of oil or gas infrastructure, in the Atlantic Ocean in the beds of any waters of the Commonwealth. Current law authorizes the granting of oil and gas leases on such state-owned bottomlands, which generally are those subaqueous lands lying within three miles of the shore. The bill also repeals a section of the Code of Virginia stating the Commonwealth's support for federal efforts to explore for natural gas more than 50 miles off shore.”

HB 2358 (and identical companion bill SB 1414) – Potomac Aquifer recharge monitoring; advisory board; laboratory established; SWIFT Project.
“Creates an advisory board and a laboratory to monitor the effects of the Sustainable Water Infrastructure for Tomorrow (SWIFT) Project being undertaken by the Hampton Roads Sanitation District (HRSD).  The bill establishes a 10-member advisory board called the Potomac Aquifer Recharge Oversight Committee (the Committee), directing it to ensure that the SWIFT Project is monitored independently. The bill provides that the Committee shall consist of the State Health Commissioner, the Director of the Department of Environmental Quality, the Executive Director of the Hampton Roads Planning District Commission, the two Co-Directors of the Laboratory, the Director of the Occoquan Watershed Monitoring Laboratory, two Virginia citizens appointed by the Governor, and two nonvoting members. The Committee is required by the bill to meet at least quarterly during the initial three years of its existence. The bill also authorizes the Committee to appoint a science and technical advisory council and directs the Committee to request funding from HRSD for the first three years of monitoring of the recharge of the aquifer.

“The bill also creates the Potomac Aquifer Recharge Monitoring Laboratory (the Laboratory) at a location to be selected in the Hampton Roads region, placing it under the co-direction of one Old Dominion University faculty member and one Virginia Tech faculty member. The bill provides that the Laboratory shall monitor the impact of the SWIFT Project on the Potomac Aquifer, manage testing data, and conduct water sampling and analysis.  The bill authorizes both the Commissioner of the Department of Health and the State Water Control Board to issue emergency orders to halt injection or make any change to any facility of the SWIFT Project.”

HB 2761 – Cave and karst protection; penalty.
“Authorizes the Department of Conservation and Recreation to include karst and related landscape features, defined in the bill, in various functions related to cave protection, including education of public agencies and private landowners, collection of data, and protection of groundwater flow from pollution. The bill makes pollution of any sinking stream, swallet, or other karst feature a Class 1 misdemeanor.”

Virginia Legislative Information System, online http://lis.virginia.gov/.  This is the online location for following the legislation of General Assembly sessions.

To learn about Virginia’s legislative process, see the “Capitol Classroom” link at http://virginiageneralassembly.gov/capitolClassroom.php?secid=23&activesec=5.

To express an opinion on legislation, citizens can find their representatives and their contact information by using the online “Who’s My Legislator” service, available at http://whosmy.virginiageneralassembly.gov/; or find members’ contact information at http://virginiageneralassembly.gov/membersAndSession.php?secid=1&activesec=0#!hb=1&mainContentTabs=0.