Unless otherwise noted, all Web addresses mentioned were functional as of 1-10-20.

From the Cumberland Gap to the Atlantic Ocean, this is Virginia Water Radio for the week of January 13, 2020.  This is a revised repeat of an episode from November 2012.

This week we feature mystery sounds from a bird whose flocks are known for filling eastern Virginia skies and wetlands in winter.  Have listen for about 10 more seconds and see if you can guess what’s making this riot of sound.  And here’s a hint: Snow or no, the Chesapeake Bay area entertains huge groups of these visitors every winter.

If you guessed Snow Geese, you’re right!  After breeding in the Arctic and other far northern lands in summer, some populations of Snow Geese return to the Chesapeake Bay region for late fall and winter.  Gathering to feed on plants around water bodies and in wetlands and agricultural fields, Snow Geese flocks can number in the thousands.  The species has two color forms, or “morphs”: a light, or white, morph; and a dark, or blue, morph.  From 1916 to 1975, Snow Goose hunting in the eastern United States was banned due to low population levels of the birds, but in recent decades populations have increased greatly.   In fact, the Snow Goose is now one of the most abundant species of waterfowl in North America, according to the Cornell Lab of Ornithology’s “All About Birds” Web site.  And big gangs of Snow Geese are a sight to behold: According to a description by the Cornell Lab, “watching huge flocks of Snow Geese swirl down from the sky, amid a cacophony of honking, is a little like standing inside a snow globe.”

Besides its biological features, this bird species is also noteworthy for its role as a character and a symbol in a World War II-era short story titled, “The Snow Goose.”  American author Paul Gallico’s November 1940 story, set in coastal England, merges themes of life on the water, disability, emotional connection, natural history, and human history, particularly the civilian-aided evacuation of British troops from Dunkirk, France, in mid-1940.

Thanks to the U.S. Fish and Wildlife Service for making this week’s sound available for public use.  We close with some instrumental music, with a title recalling the behavior of a Snow Goose flock taking flight if it senses danger from predators.  Here’s part of “Elusive Goose,” by Andrew and Noah VanNorstrand, from their 2007 album, “A Certain Tree.”

This Virginia Water Radio episode revises and replaces Episode 138, 11-26-12.  This week’s script was based in part on work done by Minni Gupta, a 2011 Virginia Tech graduate who did an internship with the Virginia Water Resources Research Center in the fall 2010 semester.  Ms. Gupta wrote Virginia Water Radio Episode 38, 10-18-10, which also includes Snow Geese sounds and information.

The Snow Geese sounds heard in the episode were taken from the U.S. Fish and Wildlife National Digital Library, http://digitalmedia.fws.gov/cdm/.  The specific URL for the Snow Gees sound clip was https://digitalmedia.fws.gov/digital/collection/audio/id/70/rec/1, accessed 1/10/20.  These sounds were also used in Episode 150, 2-25-123, on winter birds in the Chesapeake Bay region.

“Elusive Goose,” from the 2007 “A Certain Tree,” is copyright by Andrew and Noah VanNorstrand and Great Bear Records, used with permission.  More information about Andrew and Noah is available online at https://andrewandnoah.bandcamp.com/. 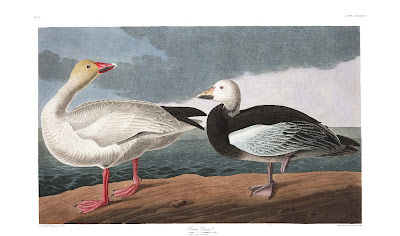 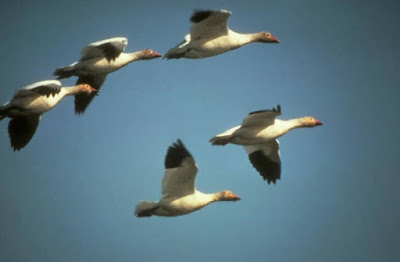 Snow Geese in flight (location and date unidentified).  Photo made available for public use the U.S. Fish and Wildlife Service's National Digital Library, online at http://digitalmedia.fws.gov; the specific URL for the image is https://digitalmedia.fws.gov/digital/collection/natdiglib/id/4372/rec/1, as of 1/14/20.

EXTRA INFORMATION ABOUT THE SNOW GOOSE

The scientific name of the Snow Goose is Anser caerulescens (formerly Chen caerulescens).

Here are some points about the Snow Goose, excerpted from the Virginia Department of Game and Inland Fisheries, “Fish and Wildlife Information Service/Snow Goose,” online at online at https://vafwis.dgif.virginia.gov/fwis/booklet.html?&bova=040410&Menu=_.Taxonomy&version=18271.

“The adult is identical to the white phase of the lesser snow goose, all white with black primaries and gray wing coverts. …The bill is pinkish-red and the nail white.  A black line runs along the edge of both mandibles.  The legs and feet are pink.  The average length is 78 cm” [about 31 inches; a bird’s length is measured from head to tail].

“The breeding season is from late June to early July. …This species will display aggressive behavior, and the wing tips are displayed prominently.  There is a triumph ceremony wherein the pairs point the head and neck upwards calling noisily with half open wings.  They arrive on the breeding grounds already paired and remain in flocks until the thaw. … It breeds on level plains some distance inland on steep slopes and cliff faces, and sheltered sides of ravines.  It selects a slightly raised mound on a ridge in a mostly level area that is well-drained with westward slopes or on vegetated hilltops, habitats where stony terrain meets wet and grassy tundra, where land is flat, marshy and protected from the north by mountains.  This species constructs a nest of grasses on the ground.  The nest is a scrape with surrounding vegetation added.”

During migration, this species rests on fresh and saltwater marshes, flooded meadows, grain fields, and lakes.   It generally avoids forested areas.  The fall migration begins in early September…. The spring migration begins in late February.  There is a narrow migration corridor through eastern Canada and the northeastern United States.  Spring flocks are 35-400 birds.  It migrates above 2000 feet by day or night.  The Chesapeake Bay migration during the fall is from October 15 to December 15, with a peak from November 10 to December 15.   In the spring it is from February 20 to March 30, with the peak from February 20 to March 15.”

Winter Habitat In or Near Virginia

“They are found at the mouth of Chesapeake Bay and along the coast.  They are found in coastal bays and shallow estuaries often with marshy areas nearby. ... They prefer abundant emergent vegetation in brackish marshes.”

“This species feeds in marshes in the early morning or late afternoon or sometimes at night.  It pulls plants up rather than grazing… It takes saltmarsh cordgrass, which is an important food in Chesapeake Bay.  Juvenile foods include fruits, flowers, horsetail shoots, grasses, bulrushes, grain, wild and cultivated rice, rootstalks and shoots of bulrush and saltmarsh cordgrass.   They will also feed in agricultural fields….”

Martin Benson, “The Literature of Paul Gallico,” online at http://www.paulgallico.info/notitle.html.

Virginia Department of Game and Inland Fisheries, “Fish and Wildlife Information Service,” online at http://vafwis.org/fwis/?Title=VaFWIS+Species+Information+By+Name&vUT=Visitor.  The Snow Goose entry is online at https://vafwis.dgif.virginia.gov/fwis/booklet.html?&bova=040410&Menu=_.Taxonomy&version=18271.

Following are links to other episodes on geese.

Following are links to other episodes on birds found in coastal Virginia in winter.