Unless otherwise noted, all Web addresses mentioned were functional as of 1-15-21.

From the Cumberland Gap to the Atlantic Ocean, this is Virginia Water Radio for the week of January 18, 2021.  This episode is a revised repeat of an episode from January 2015.

This week, we feature a tune whose name and note patterns recall how rivers and streams follow laws of energy and physics.  Have a listen for about 40 seconds.

You’ve been listening to part of “Minor Meander,” by No Strings Attached, on their 1999 album, “In the Vinyl Tradition Volume II,” from Enessay Music.  As the tune repeatedly builds up and then cascades down, it captures the pattern of solar energy evaporating water up into the atmosphere, and gravitational energy pulling water back to the landscape, through stream and river channels, and ultimately to the ocean.  That energy gives water the force to erode and shape a stream’s channel and floodplain.  Water’s erosive force—which varies depending on the water’s rate of flow—meets different levels of resistance in the various kinds of rocks, soils, living things, and human structures over which water flows.  The complicated interaction between stream force and materials resistance results in a variety of stream-channel patterns.  These pattern range from straight, single-channel streams to braided rivers with many winding and intersecting channels.  One of the possible patterns is large changes in direction, called meanders or bends, seen famously in the Seven Bends area of the North Fork Shenandoah River in Shenandoah County, Va.

Thanks to No Strings Attached for permission to use this week’s music, and we close with about 15 more seconds of musical energy in “Minor Meander.”

Thanks to Kevin McGuire, associate director of the Virginia Water Resources Research Center, for his help with this episode. 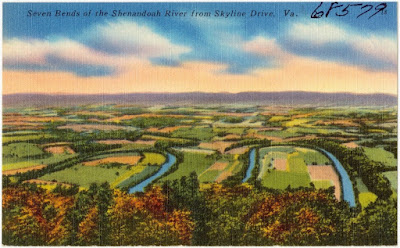 Post card image (dated between 1930 and 1945) of part of the Seven Bends of the North Fork Shenandoah River, in Shenandoah County, Virginia.  From the Boston Public Library, made available for use (with no known copyright restrictions) by the Digital Pubic Library of America, online at https://www.digitalcommonwealth.org/search/commonwealth:2z10wt39r. 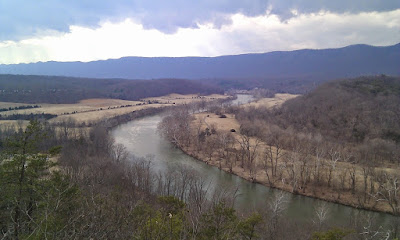 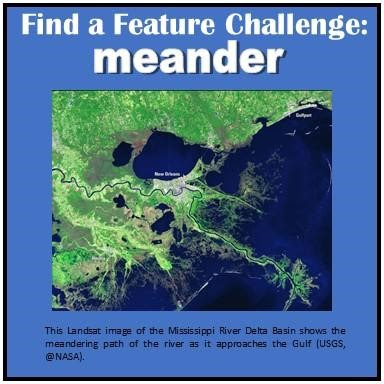 Satellite image showing meanders in the Mississippi River as it approaches the Gulf of Mexico.  This image is part of the U.S. Geological Survey’s “Find a Feature Challenge: Meander” Web page, online at https://www.usgs.gov/media/galleries/find-a-feature-meander, 1/18/21.

For More Information about Watersheds, Streams and Rivers, and Other Water Science Topics

Following are links to some other episodes on patterns in streams, rivers, and watersheds.

Grades K-3 plus 5: Force, Motion, and Energy
2.2 – Different types of forces may cause an object’s motion to change.
3.2 – Direction and size of force affects the motion of an object.
5.2 – Energy can take many forms.
5.3 – There is a relationship between force and energy of moving objects.

Grades K-3 plus 5: Matter
3.3 – Materials interact with water.
5.7 – Matter has properties and interactions.

Grade 6
6.4 – There are basic sources of energy and that energy can be transformed.
6.6 – Water has unique physical properties and has a role in the natural and human-made environment.
6.8 – Land and water have roles in watershed systems.

World Geography Course
WG.2 – How selected physical and ecological processes shape the Earth’s surface, including climate, weather, and how humans influence their environment and are influenced by it.