Unless otherwise noted, all Web addresses mentioned were functional as of 1-14-22.

From the Cumberland Gap to the Atlantic Ocean, this is Virginia Water Radio for the week of January 17, 2022.  This revised episode from January 2016 is part of a series this year of winter-related episodes.

With a winter storm state of emergency declared by Virginia’s governor on January 14, that excerpt from “Drive the Cold Winter Away,” by Timothy Seaman of Williamsburg, Va., sets the stage for a winter word whirlwind!  Have a listen for about 15 seconds to a series of mystery guest voices, and see if you know what all of these voices would be saying in English.  And if you’ve been shoveling, plowing, or sledding, you probably don’t need a hint!

If you guessed snow, you’re right!  You heard the words for snow in Yiddish, German, Russian, French, Italian, Spanish, Mandarin Chinese, and Malay.  Even within individual languages, snow can have many names.  The Inuit people of the Arctic region, for example, have different terms for falling snow, snow that collects on trees, snow on the ground, wind-beaten snow, drifting snow, and many others.  Snow scientists, too, use different terms to distinguish types of snow crystals, snowfalls, and snow conditions on the ground.  Columns, plates, needles, stellar crystals, and irregular crystals are some of the terms used by scientists to describe snowflake types.  And can you guess what term encompasses not only snow and ice on land but all of the frozen water on earth? If you said cryosphere, you’re a snow genius!

Thanks to several Blacksburg residents for lending their voices to this episode.  Thanks also to Timothy Seaman for permission to use this week’s music, and we close with about 20 more seconds of “Drive the Cold Winter Away.”

“Drive the Cold Winter Away” is a traditional tune performed by Timothy Seaman and Phillip Skeens on the 1998 album “Celebration of Centuries,” copyright by Timothy Seaman and Pine Wind Music, used with permission.  More information about Mr. Seaman’s music is available online http://timothyseaman.com/.  This selection was used previously by Virginia Water Radio most recently in Episode 553, 11-30-20.

Thanks to several Blacksburg, Va., residents for recording snow terms on January 20, 2016. 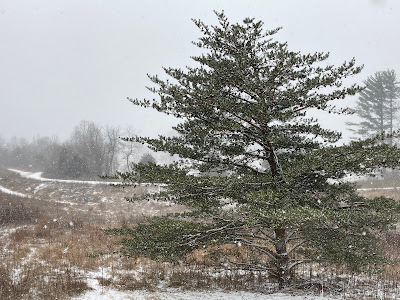 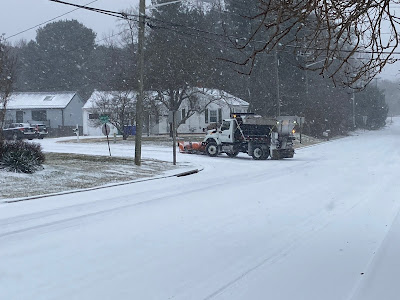 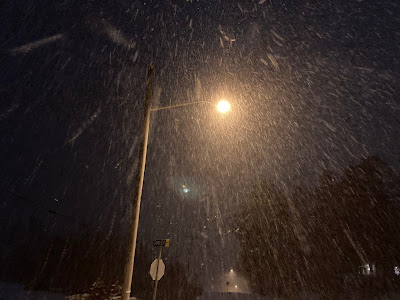 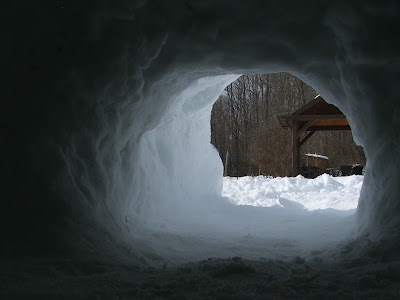 View from inside an igloo constructed in a Blacksburg, Va., neighborhood, February 15, 2014.

The following information is quoted from National Snow and Ice Data Center, “All About Snow,” online at https://nsidc.org/cryosphere/snow, accessed January 18, 2022.

“Snow cover is a part of the cryosphere, which traces its origins to the Greek word kryos for frost.  Snow is precipitation in the form of ice crystals. It originates in clouds when temperatures are below the freezing point (0 degrees Celsius, or 32 degrees Fahrenheit), when water vapor in the atmosphere condenses directly into ice without going through the liquid stage.  Once an ice crystal has formed, it absorbs and freezes additional water vapor from the surrounding air, growing into a snow crystal or snow pellet, which then falls to Earth.

“Snow falls in several forms:
*Snowflakes are clusters of ice crystals that fall from a cloud.
*Snow pellets, or graupel, are opaque ice particles in the atmosphere.  They form as ice crystals fall through supercooled cloud droplets, which are below freezing but remain a liquid.  The cloud droplets then freeze to the crystals, forming a lumpy mass. Graupel tends to be soft and crumbly.
*Sleet is composed of drops of rain or drizzle that freeze into ice as they fall, and is sometimes called a wintery mix of rain and snow.  These small, translucent balls of ice are usually smaller than 0.76 centimeters (0.30 inches) in diameter.  Official weather observations may list sleet as ice pellets. In some parts of the United States, the term sleet can refer to a mixture of ice pellets and freezing rain.”

Nolan J. Doesken and Arthur Judson, The Snow Booklet: A Guide to the Science, Climatology, and Measurement of Snow in the United States, Colorado State University, Fort Collins, Colo., 1997.

National Oceanic and Atmospheric Administration (NOAA)/National Ocean Service, “What is the Cryosphere?”, online at http://oceanservice.noaa.gov/facts/cryosphere.html.

National Snow and Ice Data Center, “All About Snow,” online at https://nsidc.org/cryosphere/snow.

For More Information on Snow and Snowfall Forecasts and Accumulations

For sources of information on snowfall forecasts and accumulation, please see this Virginia Water Central News Grouper post: Snowfall Prediction and Accumulation Information and Map Sources for Virginia and Nationwide, as of January 2022.

All Water Radio episodes are listed by category at the Index link above (http://www.virginiawaterradio.org/p/index.html).  See particularly the “Weather/Climate/Natural Disasters” subject categories.

Following are links to several other winter-related episodes, including episodes on some birds that reside in Virginia typically only in winter (listed separately).  Please note that some of these episodes are being redone in late 2021 and early 2022; in those cases, the respective links below will have information on the updated episodes.

Grades K-3 plus 5: Matter
K.4 – Water is important in our daily lives and has properties.
2.3 – Matter can exist in different phases.

Grade 6
6.6 – Water has unique physical properties and has a role in the natural and human-made environment.
6.7 – Air has properties and the Earth’s atmosphere has structure and is dynamic.

Earth Science
ES.11 – The atmosphere is a complex, dynamic system subject to long-and short-term variations.
ES.12 – The Earth’s weather and climate result from the interaction of the sun’s energy with the atmosphere, oceans, and the land.

World Geography Course
WG.2 – How selected physical and ecological processes shape the Earth’s surface, including climate, weather, and how humans influence their environment and are influenced by it.
WG.3 – How regional landscapes reflect the physical environment and the cultural characteristics of their inhabitants.