Unless otherwise noted, all Web addresses mentioned were functional as of 1-7-22.

From the Cumberland Gap to the Atlantic Ocean, this is Virginia Water Radio for the week of January 10, 2022.

That was House Speaker Eileen Filler-Corn and Lt. Gov. Justin Fairfax calling to order, respectively, the House of Delegates and the Senate as the Virginia General Assembly convened on January 13, 2021.  This week, those sounds open Virginia Water Radio’s annual introduction to the General Assembly, which convenes this year on January 12.  We set the stage with about 40 seconds of music whose lyrics capture some of the efforts and challenges at work in each General Assembly.  Here’s part of “Try to Change It,” by Bob Gramann of Fredericskburg, Va., from his 2001 album “See Farther in the Darkness.”

MUSIC – ~41 sec – Lyrics: “Gotta focus, time is growin’ short.  I beg for concentraion, I count on your support.  If it weren’t so difficult, I’d have finished yesterday; ask me just what I need: I need another day.   Try to change it, but I can’t change it; locomotive rolls on through hills and snow and rain.  Try to change it; why can’t I change it?  Strength of will, push and pull, I’m bettin’ on that train.”

The Virginia General Assembly—consisting of 100 members of the House of Delegates and 40 members of the Senate—convenes in Richmond each year on the second Wednesday in January.  So-called “long sessions” scheduled for 60 days are held in even-numbered years, while 30-to-45-day “short sessions” are held in odd-numbered years.  A new biennial budget is proposed in each even-numbered year session for the upcoming two fiscal years, while amendments to the current budget may be considered every year.

Besides the budget, the General Assembly typically considers two-to-three thousand bills and resolutions.  In recent years about 150 to 200 of those bills and resolutions have related to water resources, either directly through impacts on aquatic environments, fisheries, water supplies, or other water uses, or indirectly through impacts on energy and land uses that, in turn, affect water.  The budget also affects water, particularly through funding of natural resource-related departments, such as Conservation and Recreation, Environmental Quality, Wildlife Resources, and the Marine Resources Commission.

Action on measures in the General Assembly involves sub-committees, full committees, and floor debate.  Passed bills go to the governor for approval, veto, or proposed changes, and bills with a governor’s veto or proposed changes return to the Assembly for further consideration during a reconvened session, usually held in April.   All along the way, citizens, interest groups, and other stakeholders vie to have a say through information and opinions.  You can join in by following the Assembly’s work and by communicating with your local delegate or senator about issues of concern. Tools to help you do so are available online at virginiageneralassembly.gov.

Thanks to Bob Gramann for permission to use this week’s music, and we close with about 10 more seconds of “Try to Change It.”

“Try to Change It,” from the 2001 album “See Farther in the Darkness,” is copyright by Bob Gramann, used with permission.  More information about Bob Gramann is available online at https://www.bobgramann.com/folksinger.html.  This music was used previously by Virginia Water Radio in Episode 506, 1-6-20. 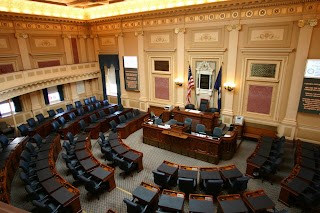 House of Delegates Chamber in the Virginia State Capitol Building.  Photo by the Virginia General Assembly, accessed at https://www.flickr.com/photos/virginiageneralassembly/8006920285/, 1/10/22. 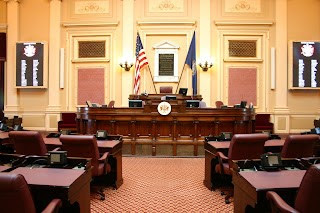 Video streams of sessions and meetings for both the House of Delegates and the Senate, including committees, are available online at https://virginiageneralassembly.gov/virginiaLegislature.php?secid=20&activesec=2# (click on the + icon at the center top of that page), as of 12-28-21.

Committees are key parts of the General Assembly process.  Legislation about water or about activities that can affect water may be assigned to any of several standing committees, most of which meet weekly during the General Assembly session.  Two committees that receive many (but not all) of the water-related bills are the House Agriculture, Chesapeake and Natural Resources Committee, which meets weekly on Wednesdays at 1 p.m., and the Senate Agriculture, Conservation and Natural Resources Committee, which meets weekly on Tuesdays, one-half hour after adjournment of the day’s floor session.  Information about all standing committees as of the 2022 session—including membership, meeting times, and legislation being considered—is available online at http://lis.virginia.gov/221/com/COM.HTM.

To express an opinion on legislation, citizens are requested to contact their respective delegate of senator.  If you do not know your representatives or their contact information, you can use the online “Who’s My Legislator” service, available at http://whosmy.virginiageneralassembly.gov/.  You can also find members’ contact information at these links:
House of Delegates, at http://virginiageneralassembly.gov/house/members/members.php;
State Senate, at https://apps.senate.virginia.gov/Senator/.

The Lobbyist-In-A-Box subscriber service also offers free tracking for up to five bills, and it offers tracking of more than five bills for a fee; visit http://lis.virginia.gov/h015.htm.  For more information or assistance, phone Legislative Automated Systems at (804) 786-9631 or Virginia Interactive at (804) 318-4133).