Unless otherwise noted, all Web addresses mentioned were functional as of 5-20-22.

From the Cumberland Gap to the Atlantic Ocean, this is Virginia Water Radio for the weeks of May 23 and May 30, 2022.  This episode, marking the Memorial Day holiday observed this year on May 30, repeats an episode first done in 2015.

That tune, composed during the U.S. Civil War, sets the stage for a water-related exploration of the origin of Memorial Day.  Have a listen to the music for about 35 more seconds.

You’ve been listening to a version of “All Quiet Along the Potomac Tonight,” recorded by Chloe Benner and Stewart Scales.  The tune was composed in 1863 by John Hill Hewitt.  The title, and the lyrics associated with the tune, are from “The Picket Guard,” a poem by Ethel Lynn Beers, published in 1861.  The poem relates the loneliness, homesickness, and then sudden death of a rank-and-file soldier patrolling the dark, wooded, and deceptively quiet Potomac riverbank.  As a similar tragic fate befell tens of thousands of Civil War soldiers along rivers, ridges, and battle lines in Virginia and elsewhere, surviving family and friends began honoring fallen soldiers by decorating their graves with flowers, especially during spring.  The practice grew across both North and South, eventually becoming a spring tradition known as “Decoration Day.”

On May 5, 1868, Gen. John Logan called for Decoration Day to be an annual, national holiday on May 30, and the first national ceremony was held that year in Arlington National Cemetery, near the banks of the Potomac.  After World War I, the annual observance began to include honoring those who had died in all U.S. military conflicts.  In 1971, Congress declared Memorial Day an official national holiday, to occur on the last Monday of May.

Memorial Day invokes very personal and local expressions of honor and remembrance, true to the holiday’s origin of individuals decorating Civil War graves with flowers.  In that spirit, we close this tribute to Memorial Day with about 25 seconds of “Flowers of the Forest,” by No Strings Attached, from their 2002 album, “Old Friend’s Waltz.”

Information on “All Quiet Along the Potomac,” about Ethel Beers, the author of the poem from which the song was derived, and about John Hill Hewitt, who composed the tune, is available from Bartleby.com, online at http://www.bartleby.com/270/13/474.html; from Britannica Encyclopedia, online at www.britannica.com/EBchecked/topic/58438/Ethel-Lynn-Beers; from Library of Congress, “All quiet along the Potomac to-night,” online at https://www.loc.gov/item/ihas.200002411/; and from Song of America, online at https://songofamerica.net/song/all-quiet-along-the-potomac-tonight/.

“Flowers of the Forest” and “Old Friend’s Waltz” are copyright by No Strings Attached and Enessay Music, used with permission.  More information about the now-retired, Blacksburg/Roanoke-based group No Strings Attached is available online at https://www.enessay.com/index.html.  This music was used previously by Virginia Water Radio most recently in Episode 573, 4-19-21.  Information on “Metsäkukkia,” the original Finnish tune on which the No Strings Attached selection was based, is available from Andrew Kuntz, “The Fiddler’s Companion,” online at http://www.ibiblio.org/fiddlers/MER_MIC.htm; and from Jeremy Keith, “The Session,” online at http://thesession.org/tunes/4585.

(Unless otherwise noted, photographs are by Virginia Water Radio.) 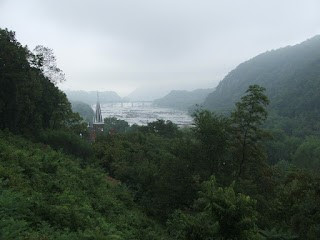 Looking towards the confluence of the Shenandoah River with the Potomac River at Harper’s Ferry, West Va., August 14, 2008.  Harper’s Ferry was a strategic location and the site of a federal arsenal during the Civil War era. 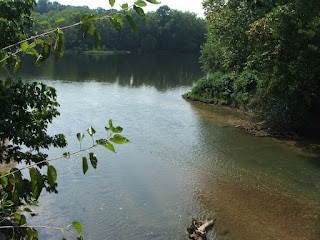 The confluence of Antietam Creek (foreground) with the Potomac River in Maryland, as seen from the C&O Canal Towpath, August 13, 2008.  The confluence is several miles downstream of where the creek flows through Sharpsburg, Md., the site of a major Civil War battle in 1862.

EXTRA INFORMATION ON THE HISTORY OF MEMORIAL DAY

The following information is quoted from the Library of Congress, “Today in History—May 30/Memorial Day,” online at https://www.loc.gov/item/today-in-history/may-30/.

“In 1868, Commander in Chief John A. Logan of the Grand Army of the Republic issued General Order Number 11 designating May 30 as a memorial day ‘for the purpose of strewing with flowers or otherwise decorating the graves of comrades who died in defense of their country during the late rebellion, and whose bodies now lie in almost every city, village, and hamlet churchyard in the land.’

“The first national celebration of the holiday took place May 30, 1868, at Arlington National Cemetery, where both Confederate and Union soldiers were buried.  Originally known as Decoration Day, at the turn of the century it was designated as Memorial Day.  In many American towns, the day is celebrated with a parade.

“Southern women decorated the graves of soldiers even before the Civil War’s end.  Records show that by 1865, Mississippi, Virginia, and South Carolina all had precedents for Memorial Day.  Songs in the Duke University collection Historic American Sheet Music include hymns published in the South such as these two from 1867: ‘Kneel Where Our Loves are Sleeping,’ dedicated to ‘The Ladies of the South Who are Decorating the Graves of the Confederate Dead,’ and ‘Memorial Flowers,’ dedicated ‘To the Memory of Our Dead Heroes.’

“When a women’s memorial association in Columbus, Mississippi, decorated the graves of both Confederate and Union soldiers on April 25, 1866, this act of generosity and reconciliation prompted an editorial piece, published by Horace Greeley’s New York Tribune, and a poem by Francis Miles Finch, ‘The Blue and the Grey,’ published in the Atlantic Monthly.  The practice of strewing flowers on soldiers’ graves soon became popular throughout the reunited nation.

“President Lyndon Johnson proclaimed Waterloo, New York, as the ‘Birthplace of Memorial Day,’ because it began a formal observance on May 5, 1866.  However, Boalsburg, Pennsylvania, also claims to have held the first observance, based on an observance dating back to October 1864.  Indeed, many other towns also lay claim to being the first to hold an observance.

“In 1971, federal law changed the observance of the holiday to the last Monday in May and extended the honor to all soldiers who died in American wars.  A few states continue to celebrate Memorial Day on May 30.

“Today, national observance of the holiday still takes place at Arlington National Cemetery with the placing of a wreath on the Tomb of the Unknown Soldier and the decoration of each grave with a small American flag.  Protocol for flying the American flag on Memorial Day includes raising it quickly to the top of the pole at sunrise, immediately lowering it to half-staff until noon, and displaying it at full staff from noon until sunset. …

“Many veterans of the Vietnam War, and relatives and friends of those who fought in that conflict, make a pilgrimage over Memorial Day weekend to the Vietnam Veterans Memorial in Washington, D.C., where they pay their respects to another generation of fallen soldiers.”

On the History of Memorial Day

Smithsonian Institution/National Museum of American History, “You asked, we Answered: Why do we celebrate Memorial Day?”, by Ryan Lintelman, May 24, 2013; available online at http://americanhistory.si.edu/blog/2013/05/you-asked-we-answered-why-do-we-celebrate-memorial-day.html.

On Rivers and Other Water Bodies in the U.S. Civil War

The History PlaceTM, “The U.S. Civil War,” online at http://www.historyplace.com/civilwar/

Following are links to some other episodes on Virginia waters in history related to military conflicts.

Virginia Studies Course
VS.1 – Impact of geographic features on people, places, and events in Virginia history.
VS.7 – Civil War issues and events, including the role of Virginia and the role of various ethnic groups.

United States History to 1865 Course
USI.2 – Major land and water features of North America, including their importance in history.
USI.9 – Causes, events, and effects of the Civil War.