Unless otherwise noted, all Web addresses mentioned were functional as of 1-28-22.

From the Cumberland Gap to the Atlantic Ocean, this is Virginia Water Radio for the week of January 31, 2022.

That’s part of “Citizen of the World,” by the Virginia band No Strings Attached.  Since January 12, the 2022 Virginia General Assembly has been doing the business of the citizens of the world that live in the Commonwealth, as the members consider over 2400 bills and resolutions, including the proposed budget for the next two fiscal years.

This is Virginia Water Radio’s annual episode giving you a chance to imagine being an Assembly member, and to consider how you’d vote on some measures that directly or indirectly affect water.  I’ll briefly describe eight measures.  After each description, you’ll have a few seconds of a ticking clock sound to decide if you would vote for or against the idea, and then I’ll give the measure’s status, as of January 28.

No. 1.  House Bill 1261 would require that members of the Air Pollution Control Board, Waste Management Board, and State Water Control Board be appointed by the governor, Senate Committee on Rules, and Speaker of the House, instead of just by the governor, as done currently; and it would prevent such boards from issuing any permit, or from changing or denying any permit issued by the Department of Environmental Quality.  [SOUND – ~3 sec – ticking]  The bill was in a House committee.

No. 2.  Senate Bill 532 would repeal the Clean Energy and Community Flood Preparedness Act, passed in 2020, and require suspension of Virginia’s participation in the Regional Greenhouse Gas Initiative. a market-based carbon-trading program.  [SOUND – ~3 sec – ticking]  The bill was in a Senate committee.

No. 3.  House Bill 602 would create a Commonwealth Flood Board and a Department of Flood Control.  [SOUND – ~3 sec – ticking]  The bill was in a House committee.

No. 4.  House Bill 899 would direct the State Water Control Board to regulate aboveground storage tanks of over 250 gallons that contain hazardous substances other than oil.  SOUND – ~3 sec – ticking]  The bill was in a House committee.

No. 5.  Senate Bill 538 would establish a Seafood Industry Employment Ombudsman to assist employees and employers understand the rights and processes available to them.  SOUND – ~3 sec – ticking]  The bill was in a Senate committee.

No 6.  House Bill 1011 would direct the Department of Health to study the occurrence in Virginia’s drinking water of perfluoroalkyl and polyfluoroalkyl substances, collectively known as PFAS.  SOUND – ~3 sec – ticking]  The bill was in a House committee.

No. 7.  House Bill 577 would direct the Department of Environmental Quality to compile a list of stormwater systems in the Commonwealth and document the impact of flooding on such systems.  SOUND – ~3 sec – ticking]  The bill was yet to be assigned to a House committee.

And No. 8.  House Bill 1200 would prohibit the siting of any new municipal solid waste landfill within one mile upgradient of any existing private well.  [SOUND – ~3 sec – ticking]  The bill was in a House committee.

These measures all involve much more detail than you heard here, and over 130 other water-related measures are also under consideration.  The General Assembly’s Web site, virginiageneralassembly.gov, has tools to help you get more information and to express your opinions to Assembly members.  The 2022 General Assembly is scheduled to adjourn on March 12, so the clock is ticking.

Thanks to No Strings Attached for permission to use this week’s music, and we close with about 20 more seconds of “Citizen of the World.”

“Citizen of the World,” on the 1999 album “In the Vinyl Tradition Volume 1,” is copyright by No Strings Attached and Enessay Music, used with permission.  More information about No Strings Attached—a long-time Blacksburg- and Roanoke-based band which is no longer performing—is available online at http://www.enessay.com/index.html. 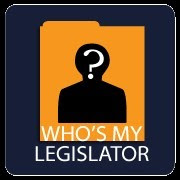 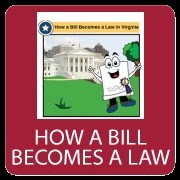 The two images above refer to two of the tools for following the Virginia General Assembly available through the “Capitol Classroom” section of the General Assembly’s Web site, http://virginiageneralassembly.gov.  Images taken from that site, 1/31/22. 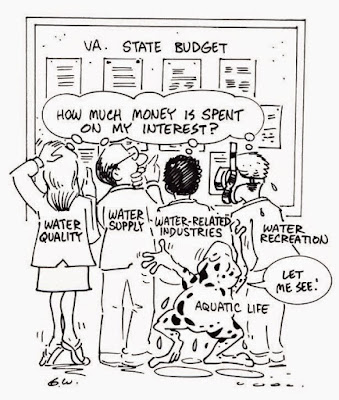 The state budget is always a major part of Virginia General Assembly sessions, and it can affect many aspects of the Commonwealth’s water resources.  Cartoon by George Wills of Blacksburg, Va. (http://www.etsy.com/people/BlacksburgArt), published originally in “Inside Virginia’s State Budget for Water,” Virginia Water Central, April 2001, p. 1; available online via http://www.vwrrc.vt.edu/water-central-news/.

EXTRA INFORMATION ABOUT LEGISLATION MENTIONED IN THIS EPISODE

Following are Virginia Legislative Information System (LIS) summaries of the eight bills in the 2022 Virginia General Assembly mentioned in this episode, as of January 29, 2022, accessed at http://lis.virginia.gov/.  The bill numbers are hyperlinked to the respective LIS pages for each measure.

1.  House Bill 1261 – State environmental boards.  “Provides for appointment of members to the State Air Pollution Control Board, the Virginia Waste Management Board, and the State Water Control Board by the Governor, the Senate Committee on Rules, and the Speaker of the House of Delegates. Currently, all members of such boards are appointed by the Governor. The bill provides that the authority of such boards does not include the authority to issue any environmental permit, or abridge or deny any environmental permit issued by the Department of Environmental Quality.”

4.  House Bill 899 – Aboveground storage tanks; Hazardous Substance Aboveground Storage Tank Fund; civil penalties.  “Directs the State Water Control Board to regulate aboveground storage tanks that measure more than 250 gallons in capacity and are used to contain hazardous substances other than oil.  The bill directs the Board to adopt regulations that establish requirements for registration, and other requirements of tank owners, and that establish a schedule of registration and renewal fees.  The bill authorizes the Board to undertake corrective action in the event of a discharge of a hazardous substance.  The bill requires tank owners notify certain parties in the event of a release of a regulated substance.  The bill also creates the Hazardous Substance Aboveground Storage Tank Fund, with moneys from the Fund to be used solely for the administration of the bill, and provides for civil penalties for violations of requirements of the bill, with such moneys received to be deposited into the existing Virginia Environmental Emergency Response Fund.”

6.  House Bill 1011 – Commissioner of Health; study of the occurrence of PFOA, PFOS, PFBA, PFHpA, PFHxS, PFNA, and other PFAS in the Commonwealth's public drinking water; report.  ”Diects the Commissioner of Health to convene a work group to study the occurrence of perfluoroalkyl and polyfluoroalkyl substances (PFAS), including perfluorooctanoic acid (PFOA), perfluorooctane sulfonate (PFOS), perfluorobutyrate (PFBA), perfluoroheptanoic acid (PFHpA), perfluorohexane sulfonate (PFHxS), perfluorononanoic acid (PFNA), hexafluoropropylene oxide-dimer acid (HFPO-DA), perfluorohexanoic acid (PFHxA), perfluoropentanoic acid (PFPeA), and perfluorobutane sulfonic acid (PFBS), in drinking water in the Commonwealth.  The work group shall report its findings and recommendations to the Governor and the Chairmen of the House Committees on Agriculture, Chesapeake and Natural Resources and Health, Welfare and Institutions and the Senate Committees on Agriculture, Conservation and Natural Resources and Education and Health by December 1, 2023.”

7.  House Bill 577 – Department of Environmental Quality; inventory of stormwater systems in the Commonwealth; impact of flooding; report.  “Directs the Department of Environmental Quality, in cooperation with the Department of Conservation and Recreation and local and regional governments, to (i) inventory and compile a master list of stormwater systems in the Commonwealth and (ii) review and document the impact of flooding on such systems.  The bill requires the Department of Environmental Quality to report the master list and the result of its review to the Secretary of Agriculture and Natural Resources and the Chairmen of the House Committee on Agriculture, Chesapeake and Natural Resources and the Senate Committee on Agriculture, Conservation and Natural Resources by December 1, 2022.”

No. 8.  House Bill 1200 – Landfill siting; proximity to private wells.  “Prohibits the siting of a new municipal solid waste landfill within one mile upgradient of any existing private well.”

Virginia Legislative Information System, online at https://lis.virginia.gov/lis.htm.  This site provides lists and summaries of all bills, searchable by topic, member, committee, etc.  As of January 28, 2021, “Session Statistics,” online at https://lis.virginia.gov/cgi-bin/legp604.exe?221+oth+STA, indicated 2430 measures (House or Senate bills, resolutions, or joint resolutions) had been introduced for the 2022 session.

To express an opinion on legislation, citizens are requested to contact their respective delegate of senator.  If you do not know your representatives or their contact information, you can use the online “Who’s My Legislator” service, available at http://whosmy.virginiageneralassembly.gov/.  You can find members’ contact information at these links:
House: http://virginiageneralassembly.gov/house/members/members.php;
Senate: https://apps.senate.virginia.gov/Senator/index.php.

The Lobbyist-In-A-Box subscriber service also offers free tracking for up to five bills, and it offers tracking of more than five bills for a fee; visit http://lis.virginia.gov/h015.htm.  For assistance, phone Legislative Automated Systems at (804) 786-9631.

Please also see the next section of this post, “Related Virginia Water Radio Episodes,” for a list of previous Water Radio episodes on the Virginia General Assembly.