Unless otherwise noted, all Web addresses mentioned were functional as of 1-6-23.

From the Cumberland Gap to the Atlantic Ocean, this is Virginia Water Radio for the weeks of January 9 and January 16, 2023.

That’s part of “Falls of Richmond,” by Timothy Seaman of Williamsburg, Va.  The falls on the James River at Richmond are a notable geographic feature of Virginia’s capital city.  A relatively short distance from those turbulent sections of the James is one of the city’s most notable human features, the State Capitol building, home of the Virginia General Assembly.  This episode is our annual overview of the General Assembly, which this year convenes on January 11 and is scheduled to adjourn on February 25.  To start, have a listen to the music for about 30 more seconds, and see if you know the General Assembly connection to the following numbers: 405, 2 and 4, 51 and 47, 21 and 19, and, last, about 163 billion.

Here are the answers:

This year will be the 405th consecutive sessions of the General Assembly started it as the Virginia House of Burgesses in 1619.

The current House of Delegates has 51 Republicans and 47 Democrats, with two seats to be filled by upcoming special elections.  [1-10-23 addition, not in audio: Special elections to fill those House seats were held on January 10, 2023.]

The current Senate has 21 Democrats and 19 Republicans.  [1-10-23 correction, not in audio: As of December 31, 2022, the Senate had only 18 Republicans, after Sen. Jennifer Kiggans, representing Virginia's 7th Senatorial District, resigned to take a seat in the U.S. House of Representatives.  A special election to fill that Senate seat was held on January 10, 2023.]

And finally, the Commonwealth’s current two-year budget is about $163 billion dollars; proposed changes to that budget will be a big part of the work of the 2023 session.

Besides the budget, the Assembly typically considers two-to-three thousand other bills and resolutions.  In recent years about 150 to 200 of those measures have related to water resources, either directly through impacts on aquatic environments, water supplies, or other water uses, or indirectly through impacts on energy or land uses that, in turn, affect water.  The budget also affects water, particularly through funding of natural resource-related departments, such as Conservation and Recreation, Environmental Quality, Wildlife Resources, and the Marine Resources Commission.

Action on measures involves sub-committees, full committees, and floor debate.  Passed bills go to the governor for approval, veto, or proposed changes, and bills with a governor’s veto or proposed changes return to the Assembly for further consideration during a reconvened session in April.   All along the way, citizens, interest groups, and other stakeholders vie to have a say through information and opinions.  You can join in by following the Assembly’s work and by communicating with your local delegate or senator about issues of concern.  Tools to help you do so are available online at virginiageneralassembly.gov.

Thanks to Timothy Seaman for permission to use this week’s music, and we close with about 20 more seconds of “Falls of Richmond.”

Virginia Water Radio is produced by the Virginia Water Resources Research Center, part of Virginia Tech’s College of Natural Resources and Environment.  For more Virginia water sounds, music, or information, visit us online at virginiawaterradio.org, or call the Water Center at (540) 231-5624.  Thanks to Stewart Scales for his banjo version of “Cripple Creek” to open and close this episode.  In Blacksburg, I’m Alan Raflo, thanking you for listening, and wishing you health, wisdom, and good water.

“Falls of Richmond,” part of the medley …., is from the 2004 album “Virginia Wildlife,” copyright 2004 by Timothy Seaman and Pine Wind Music, used with permission.  The “Virginia Wildlife” album was a collaboration between Mr. Seaman and the Virginia Department of Game and Inland Fisheries (now the Virginia Department of Wildlife Resources).  More information about Timothy Seaman is available online at http://www.timothyseaman.com/, and complete list of his music is available online at online at https://open.spotify.com/playlist/4ktkWi5LkEc2gqoPe9Brzv?si=cca5f241a3294604&nd=1.  “Falls of Richmond” was used previously by Virginia Water Radio most recently in Episode 87, 11-7-11. 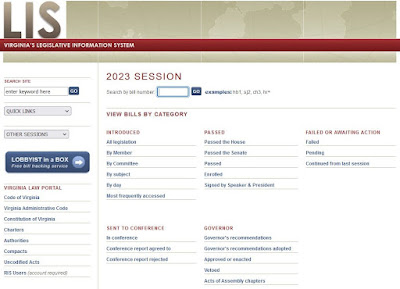 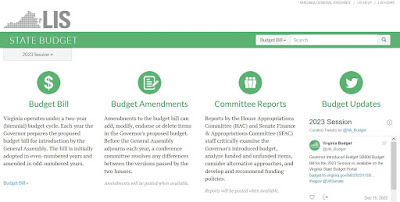 Screen shot of the Virginia Legislative Information System’s online site for information about the Virginia state budget during the 2023 Virginia General Assembly, accessed at https://budget.lis.virginia.gov/, 1/9/23.

Video streams of sessions and meetings for both the House of Delegates and the Senate, including committees, are available online at https://virginiageneralassembly.gov/membersAndSession.php?secid=1&activesec=0#!hb=1&mainContentTabs=0.

Committees are key parts of the General Assembly process.  Legislation about water or about activities that can affect water may be assigned to any of several standing committees, most of which meet weekly during the General Assembly session.  Two committees that receive many (but not all) of the water-related bills are the House Agriculture, Chesapeake and Natural Resources Committee, which meets weekly on Wednesdays at 1 p.m., and the Senate Agriculture, Conservation and Natural Resources Committee, which meets weekly on Tuesdays, one-half hour after adjournment of the day’s floor session.  Information about all standing committees as of the 2022 session—including membership, meeting times, and legislation being considered—is available online at https://lis.virginia.gov/cgi-bin/legp604.exe?ses=221&typ=lnk&val=71.

To express an opinion on legislation, citizens are advised to contact their respective delegate of senator.  If you do not know your representatives or their contact information, you can use the online “Who’s My Legislator” service, available at http://whosmy.virginiageneralassembly.gov/.  You can also find members’ contact information at these links:
House of Delegates, at http://virginiageneralassembly.gov/house/members/members.php;
State Senate, at https://apps.senate.virginia.gov/Senator/.

The Lobbyist-In-A-Box subscriber service also offers free tracking for up to five bills, and it offers tracking of more than five bills for a fee; visit http://lis.virginia.gov/h015.htm.  For more information or assistance, phone Legislative Automated Systems at (804) 786-9631 or Virginia Interactive at (804) 318-4133.

Virginia Department of Elections, online at https://www.elections.virginia.gov/.  This site has information on the special election held January 10, 2023, to fill two open House of Delegates seats and one open Senate seat (as noted in the addition/correction to the audio transcript above).