Unless otherwise noted, all Web addresses mentioned were functional as of 1-20-23.

From the Cumberland Gap to the Atlantic Ocean, this is Virginia Water Radio for the weeks of January 23 and January 30, 2023.  This update of a January 2015 episode is the second of three planned episodes this winter on Virginia’s General Assembly.

That’s part of  “World’s Too Big,” by Blacksburg, Va., musician Kat Mills, from her 2006 album, “Two.”  It opens an episode on what is one of the biggest jobs, and has some of the biggest impacts, of any General Assembly session: the state budget.  The Commonwealth operates on a biennial budget, covering two fiscal years, which run from July 1 through June 30.  In sessions in even-numbered years, the General Assembly sets the budget for the upcoming two years, and typically in every session the Assembly considers amendments to the current budget.  Virginia’s current two-year budget, as approved last year by the Assembly and the governor, is about $163 billion dollars, with about $159 billion for operating expenses and the rest for capital expenses.

Now, have a listen to the music for about 20 more seconds, and see how much of that amount you think goes to water-related matters.

According to the Virginia Department of Planning and Budget, the Commonwealth’s current two-year operating-expense budget funds about 210 programs.  Of these, Water Radio identified 23 that relate to activities that can affect water, either directly, or indirectly through air, land, or energy management.  Those 23 programs account for about $3.3 billion in the current two-year budget.  Here’s a sample of those programs, to give you a sense of where Virginia’s water-related dollars go: some direct water-connection programs are boating safety, coastal lands mapping, drinking water improvement, marine life management, port facilities, seafood promotion, and water protection; and some indirect water-connection programs are air protection, disaster and emergency preparedness, forest management, minerals management, and regulation of public utilities.

If you’d like more information about the big, complicated subject of Virginia’s state budget, you can get details from the Department of Planning and Budget, online at dpb.virginia.gov.

Thanks to Kat Mills for permission to this episode’s music, and, in the spirit of a subject too big for one short Water Radio episode, we close with about 35 more seconds of “World’s Too Big.” 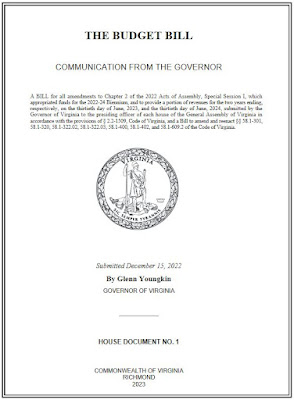 Screen shot of the title page of Governor Glenn Younkin’s proposed amendments to the 2022-2024 Virginia budget, being considered in the 2023 General Assembly.  Budget proposal accessed from the Virginia Legislative Information System’s site for budget bills in the 2023 session, online at https://budget.lis.virginia.gov/bill/2023/1/, January 23, 2023.  The 2023 budget bills are House Bill 1400 and Senate Bill 800.

EXTRA INFORMATION ABOUT THE VIRGINIA STATE BUDGET FOR 2022-2024

Information on Virginia’s 2022-2024 Biennial Budget, as passed by the 2022 General Assembly, is available from the Virginia Department of Planning and Budget, online at this link.  The information in this section is taken from that site, as of January 20, 2023.  More details on each budget area are available at that site.


Details of the 2022-2024 Operating Budget by program are available online at this link.  The entire table at that link includes 212 program lines (“Administrative and Support Services” is repeated in 7 lines).  Following are 23 line items from that table that are directly or indirectly (as assessed by Virginia Water Radio) related to water.

Following is the link to a previous episode focusing on the Virginia state budget.